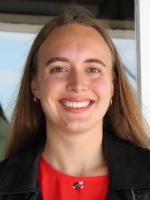 My interest area (the cognition of language), mainly researches reading, handwriting, speaking and listening. My Honours project looks at finding possible differences between the reading processes of monolingual and bilingual people. By tracking and comparing the eye movements of monolingual and bilingual individuals as they read sentences with ambiguous meanings, we’ll be able to determine how each group reads these kinds of sentences - and whether these differ depending on the number of languages they speak. This could be important to understanding the literacy levels of a growing bilingual population in Aotearoa.  I also want to play my part in achieving gender equality in science. Psychology does have more women leaders than other scientific fields, but they are still disproportionately represented compared to men. Having a senior academic role would mean I could work to increase the number of women in the field and hopefully inspire other women I teach to achieve these positions too.